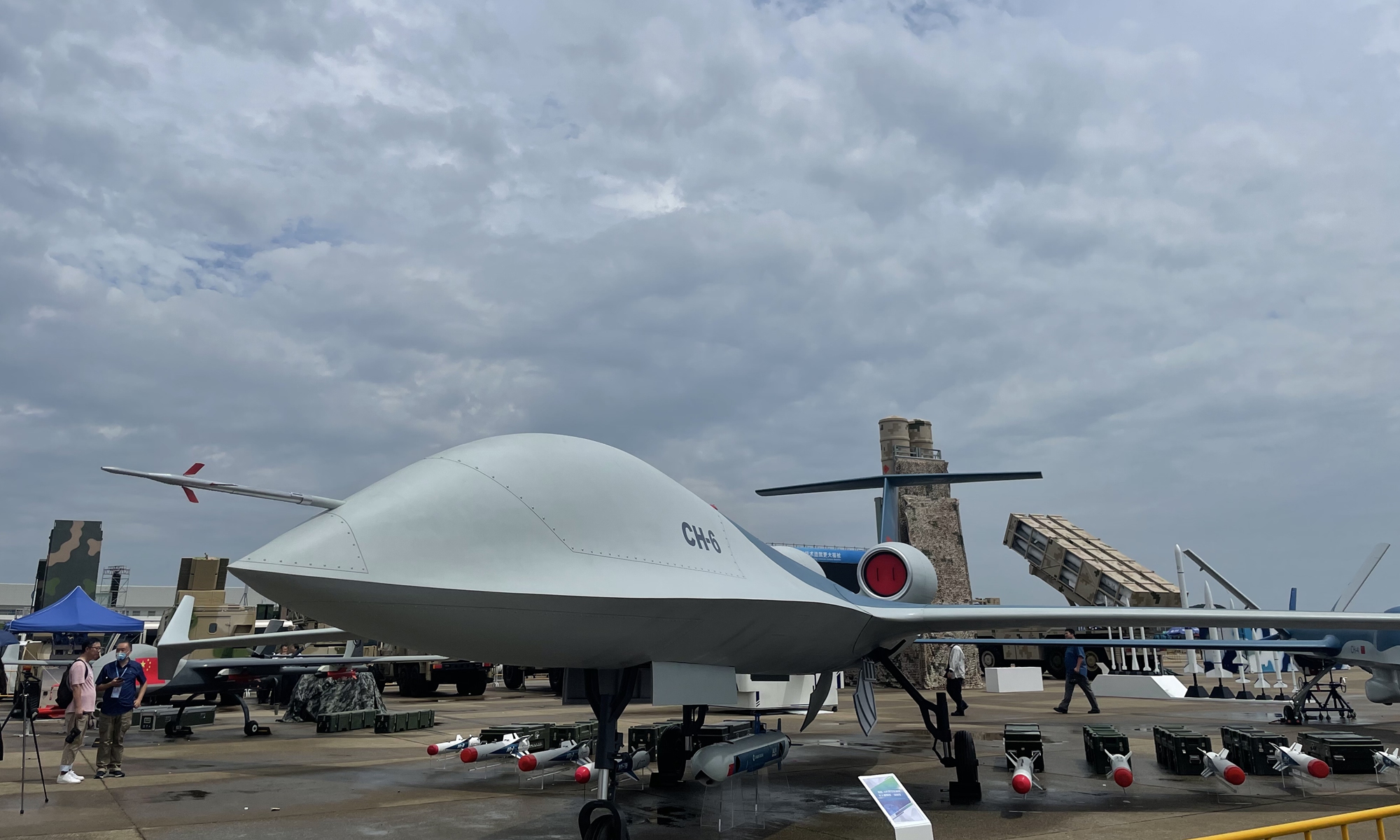 China will display the CH-6 high-altitude, long-endurance drone, the latest entry to the renowned CH drone series, at the Airshow China 2021 to be held in Zhuhai, South China’s Guangdong Province from Tuesday to Sunday. Its chief engineer said on Monday that the aircraft is characterized by high performance as well as affordability, reliability and ease of use.

Developed by the CH UAV company and based on the demands of future warfare, the CH-6 is a large, high-altitude, high-speed, long-endurance, multipurpose unmanned aerial vehicle (UAV) system aimed at high-end arms and dual-use markets, the Global Times learned from the company.

The drone, with a wingspan of 20.5 meters, has a maximum takeoff weight of 7.8 tons and can carry a large range of payloads including electro-optic systems, synthetic aperture radar, early warning radars, electronic reconnaissance systems, air-to-ground missiles and bombs, anti-radiation missiles and loitering munitions, up to 450 kilograms.

Thanks to two fuel-efficient, small- to medium-sized turbofan engines, the CH-6 has an endurance of 20 hours, allowing it to remain in the air for an extended time for a variety of military and civilian missions.

With the advantages of high altitudes and speeds, including a service ceiling of 15 kilometers and a top speed of 700 kilometers an hour, the CH-6 can effectively avoid the threats from ground-based air defense fire. Even if one engine fails, the other will be enough to bring the drone back to base. This means that the UAV has high survivability, and it can conduct persistent reconnaissance, surveillance, tracking and attack missions, analysts said.

The CH-6 is designed with the concept of modularization, and parts including engines, wings and payloads can be easily changed, the company said. For instance, the turbofan engines can be replaced by turboprop engines, spawning a variant also with outstanding performances instantly.

One of the biggest advantages of the aircraft is that, while boasting high performance, it is easy to maintain and support, and that it is very reliable and ready to sortie more often than not, Shi Wen, chief engineer and designer of the CH drone series, told the Global Times on Monday in an exclusive interview.

High performance, ease of use and relatively low procurement and operating costs should be very attractive to its potential users, Shi said.

Another new drone, the CH-817 mini attack drone, will also be displayed at the exhibit.

The mini drone can be carried and used by individual soldiers, or released from other CH series drones, Shi said, noting that it weighs about 800 grams and has an endurance of 15 minutes.

It can conduct both reconnaissance and attack missions, Shi said. “We can call it a flying grenade.”

The CH-4, CH-5 and CH-10 drones will make their reappearances at the airshow. As a combat-proven drone that has been active around the world over the past decade, the CH-4 has completed more than 4,000 missions in 20,000 hours, firing more than 800 munitions with an accuracy of 99 percent, the CH UAV company revealed on Monday.

After making its debut at the previous edition of Airshow China in 2018, the CH-7 stealth drone will not be making a return in 2021.

This is because the CH-7 is undergoing significant improvement in terms of flight performance and other systems, Shi said. “People will see new designs and new capabilities, which will make it a new product.”

The CH-7 is expected to make its maiden flight in one to two years, Shi said.