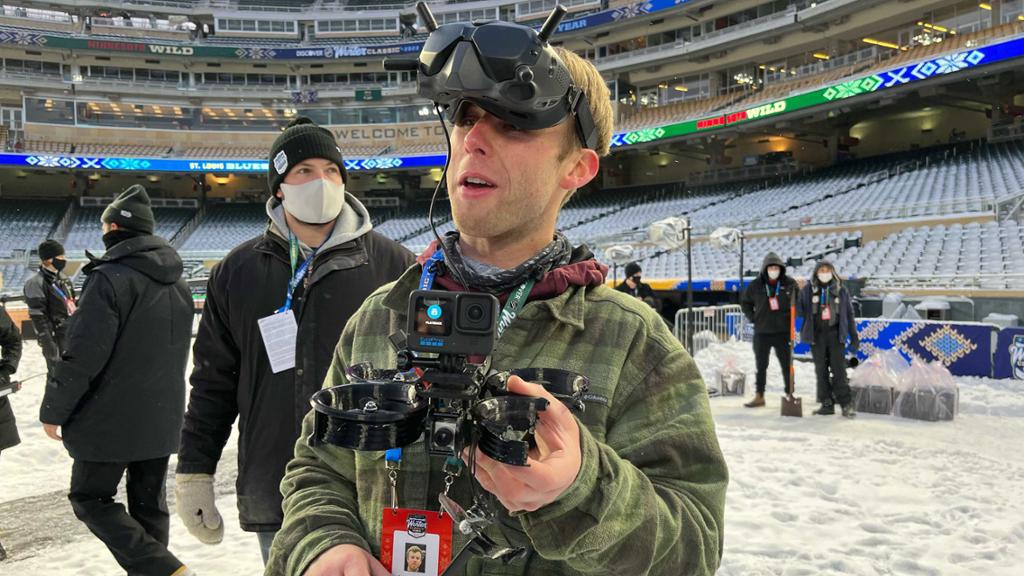 MINNEAPOLIS — The drone lifted off underneath the stands at Target Field and flew out an open door, piloted by a 25-year-old Minnesota Wild fan in a folding chair with a remote control and futuristic goggles.

In minutes, it captured a view of the 2022 Discover NHL Winter Classic you’ve got to see to believe, soaring through snow flurries over the field, darting down hallways, around corners and through the locker rooms of the Wild and St. Louis Blues, and ending up over the rink during Wild practice Friday.

The finale: The Wild lined up to shoot pucks at it.

“Honestly, it took them one shot to hit it out,” said Jay Christensen, the pilot. “Like, I thought it was going to be one, two, three and then [they’d] finally get it, but the very first shot. And that’s why these guys are professionals. They know how to take out targets in their net.”

Seriously, before Minnesota faces St. Louis on Saturday (7 p.m. ET; TNT, SN1, TVAS, NHL LIVE), watch this. The video will leave you wondering how it was shot and give you a new appreciation for everything that goes into the Winter Classic.

Christensen is a Minneapolis native and works for Sky Candy Studios, a Minneapolis video production company that has used drones to capture jaw-dropping footage of places like Ford Center at the Star, the Dallas Cowboys’ practice facility in Frisco, Texas.

For the Winter Classic shoot, Sky Candy used a small drone with four props protected by guards, with a GoPro camera attached on top. The whole thing weighed little more than a pound and wouldn’t have hurt anyone in a crash.

Christensen rubbed his hands to keep them warm in the cold and used a remote control like you’d expect. But to take the drone all the places he did, he couldn’t see it with his own eyes while he flew it.

He sat underneath the stands in a folding chair and wore FPV (first-person view) goggles, which look like a virtual-reality headset. When the GoPro camera was capturing the footage for the finished product, a camera in the drone sent real-time video to the goggles so he could navigate.

“It feels like you’re just sitting [in the] front row at a movie theater, and you get that perspective that really makes you feel like you’re out of your own body,” he said. “I have to sit when I fly it too, because if you try to stand while doing this, you get really, really uncoordinated. It’s something where that perspective, for a lot of people when they see it for the first time, it’s pretty breathtaking.”

Sky Candy meticulously planned the route and timing, coordinating with the NHL.

After the drone was in position to start just outside the stadium, it flew over a gate into Target Field, visited deer at the “Lake Winter Classic” sign in right field, and checked out the warming house and the auxiliary rinks, where clubs and teams from around Minnesota will be spotlighted to tell the story of the “State of Hockey” throughout the Winter Classic.

Then it was back outside again for a shot of NHL Network and the final shot.

Just like that, it was a wrap. About all that was left was for Sky Candy to add audio in post-production, because the whirring of the props was so loud in the raw footage.

“This is incredible, like, how many interactive parts there were,” Christensen said. “The weather obviously worried us today with the drone battery life and all that. But we got what we needed, and everybody that was out and around the field cued their spots perfectly. Yeah, and we didn’t crash into anybody, so that’s good too.”