The Legacy Of Photographer Rodney Smith Continues To Thrive – Forbes 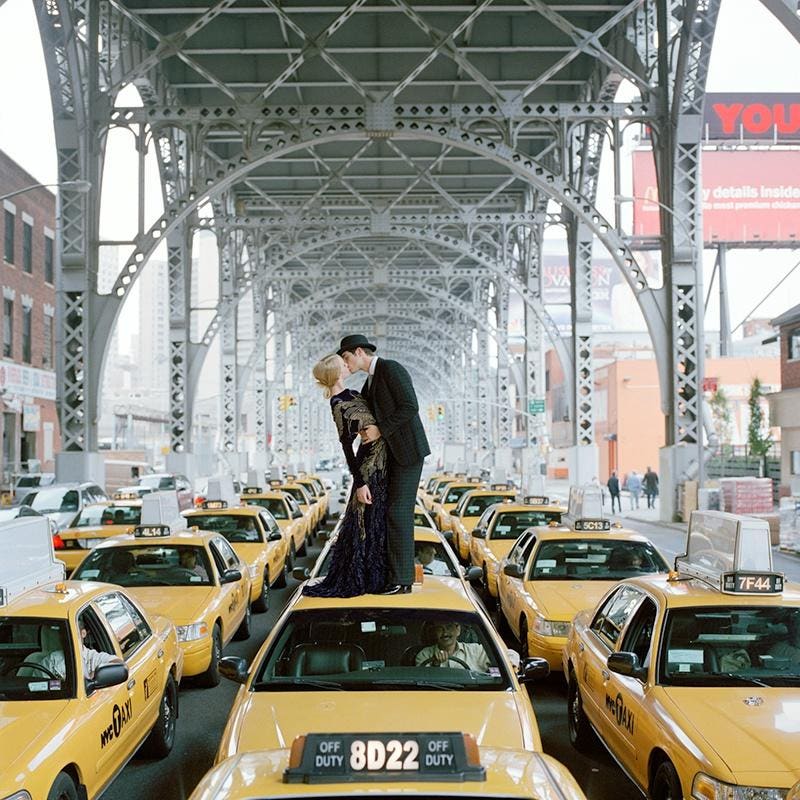 The whimsical work of acclaimed photographer Rodney Smith is celebrated this month in both the fashion and corporate worlds, coinciding with the 5th anniversary of the artist’s death. The J. Paul Getty Museum in Los Angeles has acquired ten of Smith’s prints to add to its permanent collection. The pieces were selected by the Museum’s Curator of Photographs, Paul Martineau.

“Over the course of a successful career that lasted more than 45 years, Rodney Smith developed a unique photographic vision. In each of his carefully-crafted compositions, he banishes the chaos of modern life for another that is grounded in a romantic view of the past. Like Lewis Carroll’s Alice in Wonderland, he asks us to follow him down the rabbit hole to a fantastical place that is just beyond our reach, but one intended to inspire us to be better versions of ourselves,” said Martineau.

Smith’s images, never retouched, are also featured as the centerpiece for the Hermès holiday campaign. The beauty and humor of his work led to countless collaborations within the fashion and corporate worlds, as well as the art world.

Smith first found inspiration while visiting the permanent collection of photography at The Museum of Modern Art (MOMA) during his junior Year at The University of Virginia. He went on to earn his Master’s in Theology from Yale University while minoring in photography under American photographer and photojournalist Walker Evans. There, Smith found the meaningful mode of artistic expression he’d long sought. Many of Smith’s works are black-and-white and feature sweeping landscapes with playful models, graceful movements and fantastical locations.

The signature style of his award-winning work, Oftentimes Smith’s work, influenced by Ansel Adams, reflects a keen understanding of the relationship between film and natural light.

They have often invited comparisons to the Belgian surrealist painter René Magritte, but Smith has always been regarded as one-of-a-kind and incomparable to other artists in his field.

I spoke with Leslie Smolan, Smith’s wife and head of his estate, about what these recent opportunities would have meant to Smith. We also discussed how he might have felt creating during the pandemic and her hopes for the future of his legacy.

Risa Sarachan: How does it feel seeing Rodney’s work continue to thrive after his passing?

Leslie Smolan: It’s thrilling and bittersweet at the same time. When I met Rodney in the late 1980s, I was immediately struck by his enormous talent. He was quite an interesting character who had a huge impact on everyone he met. He was intelligent. He was articulate. He had strong beliefs. He was a philosopher. His images were remarkable, and unlike any other photographer I’d ever worked with. The photographs excited me and inspired me, and they still do.

Having ten of Rodney Smith’s prints acquired by the J. Paul Getty Museum is the first step in getting the rest of the world to be inspired by his work. It’s an exciting moment because he deserves this recognition. Rodney is one of the rarest and [most] unusual artists. No one can copy him, although many have tried. And that’s because his vision comes from inside.  “These are authentic extrapolations of Rodney’s emotions and thoughts and history,” said Paul Martineau, Curator of Photographs as the J. Paul Getty Museum. “Everything that he has experienced as a human being is kind of reversed and poured into his work.”

It’s also bittersweet because Rodney was always striving to be seen. His parents were absent and unsupportive during his early childhood, and this lack of acknowledgment haunted him for most of his life. He was very serious about his work, and was disappointed because it was often dismissed as being too beautiful.

Historically, art museums embraced street photography, portraiture, landscapes and abstraction, which showed the darker side of life. Rodney studied theology and photography at Yale because he wanted to show just the opposite, the strength of humanity, its soul and its humor. He knew how hard it was to create something truly great, something that would stand the test of time. His unique combination of surrealism, style and wit, combined with the highest level of technique, makes it fitting that his work will now be seen alongside other photographic greats like Irving Penn, Edward Weston, and his mentor, W. Eugene Smith.

Risa Sarachan: How do you think he would feel about the Hermès collaboration and about the honor of his work being acquired by the Getty?

Leslie Smolan: It is interesting that they both happened at the same time. In general, I think he’d be pleased that the line between his art being used commercially and his art shown in museums has blurred. In the recent Webinar we hosted, “Is Fashion Photography Art,” Dennis Freedman, the founding creative director of W Magazine, felt that work made on assignment versus self-directed work was different. But I disagree. That was never the case with Rodney. He was always making his own pictures regardless of whether it was a commission or self-generated. He’d say his allegiance was to the image, not to the client. He wouldn’t push the camera’s shutter if it wasn’t an image he wanted posterity to judge him by.

Rodney was fine with his work being used commercially. Typically, companies with highly refined sensibilities sought him out, as they felt a kinship with his work. I know he would be honored to participate in the Hermès campaign. It is whimsical and sophisticated, just like his work. Hermès had approached us before, so they were familiar with the work. In this case, they responded to the expressive body language of his figures that allows these inanimate objects to come alive. The scale change adds a touch of surrealism, also a theme in Rodney’s work. It’s fun and exciting to see the campaign everywhere — on the back cover of the New Yorker Magazine, to full-page ads in the New York Times, to digital ads surrounding the editorial well of Airmail, Graydon Carter’s online magazine.

Being honored by the Getty is a major milestone for Rodney’s legacy. While his work is already in a number of art museums, this is the largest acquisition to date. The J. Paul Getty Museum has one of the largest collections of fashion photography in the United States. With its seminal 2018 exhibition, “Icons of Style: A Century of Fashion Photography,” the Getty celebrated commissioned work as having produced some of the most creative photography of the 20th Century. Being part of this illustrious collection will allow for further study, analysis and interpretation of the work, which has only just begun. It’s interesting to note that Rodney began his career as a black and white fine art photographer in the 1970s, shooting throughout the American South, Wales and Haiti, before receiving a fellowship to Israel. In the 1980s, he was quickly discovered by the commercial world. And at every stage of his evolution as an artist, from shooting landscapes, to portraits, to fashion, to surrealism and even color, in 2002, he broke new ground. Paul Martineau is currently authoring a retrospective of Rodney’s work, “Rodney Smith: A Leap of Faith,” which will trace the evolution of his early work and how it influenced the work we’ve come to recognize today.

Risa Sarachan: How do you hope Rodney’s legacy continues to grow?

Leslie Smolan: It feels like this is just the beginning. People have seen his work for years, but they don’t know his name or his story. He left behind an astounding body of work made between 1970 and 2016, which is only just being discovered. He was prolific. 200,000 negatives. 18,000 contact sheets. And 8,000 edited images. He was old school. He only shot film with natural light. He never shot digital or even used Polaroids to preview his shots. Rodney was fiercely stubborn about his work, refusing to compromise. The result is what curators and historians are responding to today. The work is so original and so distinctive, and the craftsmanship and the quality is done at such a high level that a lot can be learned from studying his work.

Risa Sarachan: Rodney’s work dealt with the human psyche. How do you imagine this work might have been influenced during the isolation of the pandemic?

Leslie Smolan: That’s a really good question. The irony is that Rodney was somewhat of a recluse. He loved being home. And he spent his whole life creating a home environment that fed his soul. Beauty was a sixth sense for Rodney, so he created his home, studio and gardens to reflect the world he wanted to live in. In many ways, he might have been happiest during the pandemic because he would have been home with Savannah, our 27-year-old daughter, and me, full time!

Like many creatives, making pictures was both pleasure and torture. It took a lot for him to want to take pictures. He needed a big idea and some level of external pressure. He was most inspired when he could travel, and discover some beautiful new location, where the light inspired him, creating the desire to capture the experience on film. Shooting on location often required an ensemble — his special team of assistants, models and stylists, which certainly would not have been possible during Covid. He sometimes talked about taking pictures of me, as Stieglitz photographed Georgia O’Keeffe, and Edward Weston photographed his wife, Charis Weston. I was not as enthusiastic about this idea.

He would have been very distressed about the pandemic, but even more distressed by the political divisions in our country. It was a strange blessing that he wasn’t here to see the decay in civility over these last four years. It would have been so anxiety- provoking for him. He aspired for the world to be a kinder, gentler place, not one of division and hate. It would have made him question what it meant to be human and how we could have given in to our worst instincts. He always felt if you worked hard enough and created and celebrated beauty, the world would right itself.

Risa Sarachan: Is there anything else you would like to add?

Leslie Smolan The webinar we held on December 8th was one of the first opportunities for the academic community to start a conversation about Rodney’s work. My goal is to create more of these conversations for curators and historians to talk about the work, in addition to exhibiting the work. We are encouraging curators to visit us here at the Rodney Smith Archive to view his correspondence and writings, as well as the exquisite prints in the context of the environment he created.

The success of our first webinar convinced us to pause and reflect before scheduling the next one. Future conversations will explore the themes in Rodney’s work, including surrealism, humor, craft, and spirituality. This last, spirituality, is the overarching theme of his work. He was always wrestling with his own demons, and trying to overcome the emotional challenges he experienced early in life.

In his blog, he wrote:

“For almost five decades, I have devoted my heart and soul to making pictures. My life is far better because of having the excuse that I am a photographer. I have discovered many new places and people I would never have met, and along the way, I also discovered myself. I have led an examined life, thanks to the small gift of the camera. This is my swan song of hope, expressing men as gentlemen and women as beautiful, delicate, and empowered in a way I love best. It is the way I wish the world to be, not mundane but extraordinary. It represents my belief that, just over that imaginary line, everything you see and feel in my pictures is possible.”

All of these conversations will culminate in the launch of the book being authored by Paul Martineau next fall, 2022.

Learn more about the book and upcoming virtual events here.

This interview has been condensed and edited for clarity.