The drone is being designed by NewSpace Research & Technologies in partnership with SpiceXpress.

In two years from now, the first made-in-India ‘heavy lift’ drones could begin redefining e-commerce operations in the country. These will be able to transport 150 kilograms of cargo to a distance of 150 km. In doing so, a package, which presently takes up to 72 hours to deliver, will be delivered between 8 and 12 hours.

The drone, called the HL-150, is being designed by NewSpace Research & Technologies, a Bengaluru-based startup that has partnered with SpiceJet, the only scheduled airline in the country to experiment with drone delivery services.

“The design is entirely in-house and has been made possible by the design-depth which we now have,” Sameer Joshi, the CEO of NewsSpace, said.

The company, working closely with government-run Hindustan Aeronautics Limited (HAL), designs Unmanned Aerial Vehicles (UAVs) for the Indian Air Force and swarm drones meant for the Army. Swarm drones consist of dozens of UAVs which work together to carry out various military missions. “It is these technologies that NewSpace aims to leverage in its heavy lift drones for commercial applications,” he said. 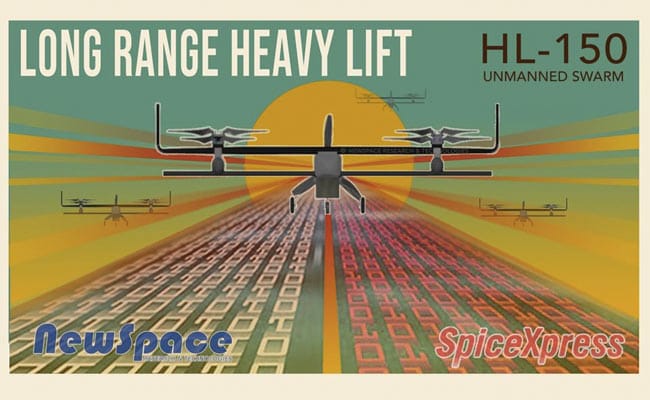 NewSpace’s HL-150 is different from most other drones.

The drones, which will fly at a speed of up to 100 km per hour, are designed to operate in rough weather and are capable of high-altitude operations over the Himalayas as well — a key design challenge which Mr Joshi is confident of meeting. “The core of the drone will be an advanced computing system which allows the drones to operate autonomously while taking independent decisions based on Artificial Intelligence algorithms that we have developed. These will enable autonomous take-off, landing, navigation and delivery of the cargo.”

The drones take off and land vertically like a helicopter, using an electric motor. They are powered through their flight by an internal combustion engine.

NewSpace’s HL-150 is different from most other drones being developed for e-commerce operations around the world. At the moment, commercial drone operations are mostly limited to last mile delivery – where a product weighing 1-5 kg is usually transported to its final destination.

“What heavy-weight drones will accomplish is the transport of up to 100-150 kg over a relatively long distance. These will be integrated with wide-spread air cargo networks and make express delivery services accessible to customers and businesses in tier 2 and 3 cities and rural India,'” Mr Joshi said.

Ajay Singh, the chairman of SpiceJet, said inducting drones in his logistics arm, SpiceXpress, will mean a “massive technological leap which will change the game for fast and cost-effective logistics in India.”

The goal is to redefine the entire supply chain business and efficiently transport goods to the most remote corners of the country, including medical supplies and perishable goods that need time-sensitive delivery. SpiceXpress aims to provide its services to 10 districts with over 150 locations across the country and aims to achieve 25,000 deliveries per month.

Heavy-lift drones are meant to operate on notified cargo lanes in the sky which are presently being identified by the aviation watchdog, the Directorate General of Civil Aviation and the Ministry of Civil Aviation.

At a ‘drone-mela’ in Madhya Pradesh’s Gwalior on Saturday, Civil Aviation Minister Jyotiraditya Scindia said, “We have become a witness to the new revolution. In the coming future, drone technology will bring significant changes in the world’s economy.”